You are here: Home / News / Plan 2 for Iowa redistricting to be released today 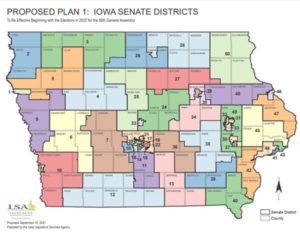 The first Senate map that was voted down.

The second set of maps proposing new boundaries for Iowa’s four congressional districts and all state legislative districts will be released after 10 this morning.

The non-partisan Legislative Services Agency will deliver the redistricting plan to the Iowa House and Senate first, then release it to the public via the Iowa General Assembly’s website.

On October 5, the 32 Republicans in the Iowa Senate rejected Plan 1 for redistricting and directed the Legislative Services Agency to develop new maps with legislative districts that were closer in total population. Governor Reynolds has set October 28 as the date for a special session so lawmakers can vote on this second set of maps.