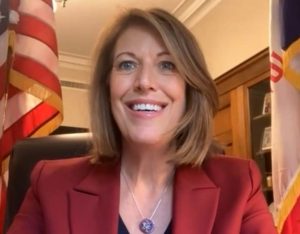 In-person appointments at local Social Security offices have been canceled during the pandemic and Axne says many Iowans cannot connect online for a virtual appointment.

“What’s happened is our older Iowans have had to turn to the 1-800 number, the hotline that’s been set up, to talk to a live person,” Axne says, “but here’s where the rub is: folks in Iowa aren’t reaching these live people.”

Axne, a Democrat from West Des Moines, says she’s heard from constituents who’ve waited on hold for hours, but never reached a real person and instead waded through recorded messages to try to find answers.

“What that means to me is that it’s really not a hotline then and so this needs to be fixed,” Axne says.

The Social Security’s toll-free automated hotline is meant to connect callers with a real person who works in a nearby Social Security office, but Axne says that’s not happening. Axne’s bill directs the Social Security Administration to assign more staff to answer phones Monday through Friday during regular business hours — 8 a.m. to 5 p.m.

“My bill doesn’t ask taxpayers to spend an extra dime,” Axne says. “What it does is ask the Social Security Administration to be more effective and efficient.”

The Iowa Association of Area Agencies on Aging has endorsed Axne’s bill. Joe Sample, the association’s executive director, says many older adults, especially those in rural Iowa, may not have access to the internet.

“Use of technology can, at times, be the very roadblock or barrier that prevents an older adult from getting what they need,” Sample says. “In 20 years, it might be that older adults will have access to affordable technology and navigating websites will be more comfortable, but that day is not today.”

Two other Democrats in the House are joining Axne’s call for more Social Security staff to answer the telephones. Congressman Tim Ryan is running for Ohio’s open U.S. Senate seat in 2022 and Congresswoman Val Demings is running to challenge Florida Republican Senator Marco Rubio in 2022.