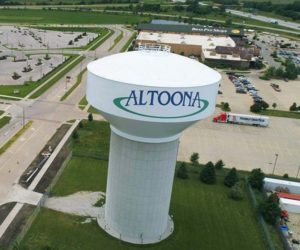 The mayors of Altoona, Iowa, and Altoona, Wisconsin are holding a friendly wager between the two communities as Iowa plays Wisconsin in football on Saturday.

Mayor Dean O’Connor, of the Iowa Altoona, says he’s hoping this will be the second bet he’s won this season, following the Hawkeyes’ victory over the Nittany Lions.

“We’d already done the bet with Penn State, Altoona, Pennsylvania, and Altoona, Wisconsin, saw that, thought it was pretty cool and wanted a piece of the action,” O’Connor says. “They reached out to our city hall, talked to our city manager and he called me in and said, ‘You guys want to do this again?’ and I said, ‘Absolutely!’.”

O’Connor says the Altoona restaurant that was offering up the steaks in the original bet signed back on for the new bet against Wisconsin. “The Big Steer put up the bone-in tomahawk ribeye steaks again and we thought we’d throw in a little Brightside Aleworks just so we could work in some other Altoona businesses, it’s a local brewery,” O’Connor says. “What they’ve got are locally-sourced cheese curds, some brats made by a local butcher and then a local brewery as well.”

The mayor says this could become an annual tradition. “There’s something like nine Altoonas in the United States. I think there’s actually one in Indiana so we could get Purdue and Indiana on that one,” O’Connor says. “Right now, we’re going to keep doing Penn State and Wisconsin whenever they play the University of Iowa. I think there’s one in Texas, so I wouldn’t mind something with Texas because I’m an ISU fan at heart.”

Altoona, Iowa won the bet with Altoona, Pennsylvania, and was sent six boxes of Mallo Cups, a chocolate-covered marshmallow candy. O’Connor says those treats, along with local cash donations of $10,000, will be taken to Iowa City this week to be given to the U-I Hospitals and Clinics.

Unlike many Iowa town names, Altoona does not have Native American roots. O’Connor says the name comes from the Latin word “altus,” meaning high point or high place.