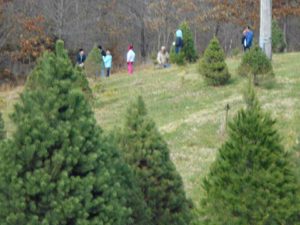 Thanksgiving is four weeks away, after which many Iowans start decorating for the holidays, but finding the perfect Christmas tree could be a challenge this year with a developing tree shortage.

David Pierce, past-president of the Iowa Christmas Tree Association, says some tree farms may be having trouble this season due to the long-running drought. “We’re a little low. We had strong demand last year due to other events like the weather, a little bit of deer damage,” Pierce says. “Our supplies are a little bit tighter this year than we would like but we’ve been here before.”

Pierce runs Honey Creek Timbers in southeast Iowa, near Morning Sun, and has a few thousand white pines and Scotch pines on his acreage. Last year’s derecho destroyed untold thousands of native hardwoods and shade trees statewide, but the powerful wind storm didn’t cause much trouble for evergreens. The heat and the dry weather, though, that can be a problem.

“The shortage that you’re probably seeing the most is on the fraser fir. That appears to me to be the most dramatic,” Pierce says. “Some of our growers in the northern part of the state, where it’s a little bit cooler, grow those. We’re not able to because it’s a little hot here in the summer.”

Many people seek out the fraser firs and Pierce says he’ll truck them in from out of state if they can’t be sourced nearby. Perhaps a worse threat to the industry than drought is the march of time, as growers with decades of experience in the business are retiring.
“We’ve seen a steady decline in those. It would probably mirror what’s happening with other older-generation farmers,” Pierce says. “But this year, we’ve seen a nice influx of new members, people who have decided they’d like to try to plant some trees, so we’re encouraged by that.”

To find a grower near you, visit https://www.iowachristmastrees.com and click the “Find a Farm” button.