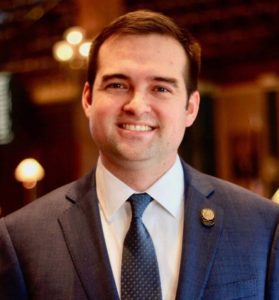 A state senator from Spirit Lake has accepted a job in another state and is resigning from the Iowa Senate. Republican Zach Whiting has accepted a job at the Texas Public Policy Foundation, a conservative think tank based in Austin, the capital of Texas.

“This all happened very suddenly,” Whiting said, “but it was an opportunity that I just, professionally, couldn’t pass up.”

Whiting, a lawyer, has been a member of the Iowa Senate since 2019. Whiting addressed his colleagues in the senate last night.

“I’m very thrilled to make a retirement speech at 33, but I’m super bummed I didn’t win the lottery,” Whiting said. “That’d be a better way to go out.”

Whiting, who is an attorney, has represented a district that includes the cities of Spencer and Rock Rapids as well as his hometown of Spirit Lake. “I do want to say a sincere thanks to all of my constituents, to all my colleagues and to all the staff that’s around here,” Whiting said. “I’m a former congressional staffer and so I appreciate the work that everybody does, the long hours that they put in.”

Whiting worked in former Congressman Steve King’s office for three years. Whiting’s resignation from the state senate is effective tomorrow at noon. Under Iowa law, the governor must set the date for a special election for Iowa Senate District 1 within five days.