You are here: Home / News / Axne injures knee, will cast this week’s US House votes virtually 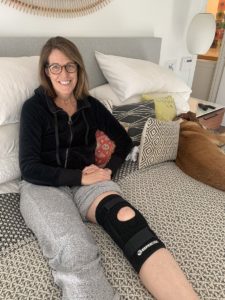 Iowa Congresswoman Cindy Axne has announced she’s injured her knee and will be casting her votes virtually this week as the U.S. House is expected to vote on an infrastructure package and the final version of President Biden’s so-called Build Back Better plan.

According to a statement released Sunday, Axne was with her dog, Addie, at a dog park in the Des Moines area when she suffered a partial tear in a knee ligament. It’s called the MCL and it connects the thigh bone to the lower leg and prevents the knee from bending inward. Axne’s doctor has advised the congresswoman to immobilize her left leg and Axne posted a photo of herself on Twitter, with her leg in a brace and her dog nearby.

In a written statement, Axne said she’s joked that she would give her left leg to see the two bills Democrats have been working on finalized, but she didn’t mean it quite so literally.