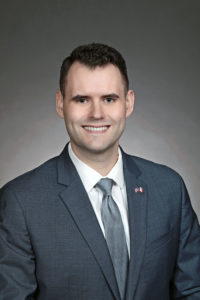 “That would just further benefit the richest and most powerful people in our state,” Wahls said.

Reynolds and the top Republican in the Iowa Senate have both said GOP lawmakers intend to pass tax cuts in the 2022 legislative session, with the ultimate, long term goal of eliminating the state income tax altogether.

“Of course it’s not a surprise coming from the Republican Party that’s their idea of tax reform, but I think just another example of how Republicans are more concerned about the special interests who fund their campaigns than the realities of everyday Iowans,” Wahls said. “Democrats are going to be really focused on a single piece in the tax debate, which is what’s fair.”

Wahls says slashing income tax rates doesn’t solve the real problems in Iowa, like a lack of access to child care. Wahls indicates Democrats also would oppose a so-called “flat tax” on income that has been proposed by Republicans in the past.

“Despite the name ‘flat tax’ there’s actually nothing that’s ‘flat’ about it,” Wahls says. “By the way, we currently have a flat tax. It’s called the sales tax…We know that the folks who wind up spending a larger part of their income on sales tax are those who are working class, middle class families, not the folks who have the most income. That will continue to be out watchword going forward.”

Wahls made his comments this weekend during an appearance on “Iowa Press” on Iowa PBS.