You are here: Home / News / Pence tells Iowa City crowd he upheld his oath on January 6 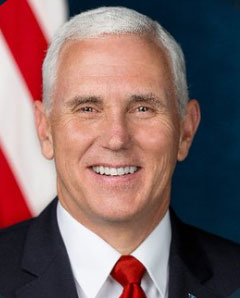 Former Vice President Mike Pence says he did his duty in presiding over the U.S. House and Senate as congress certified President Biden’s Electoral College victory on January 6.

Pence spoke to several hundred students in Iowa City tonight. A man who said his name was Jared asked Pence why he didn’t send the 2020 election “back to the states” instead. “What is the name of the person who told you to buck President Trump’s plan and certify the votes?” the man asked.

Pence, who got some laughter and applause for that answer, then told the crowd he had expressed his concerns about voting “irregularities” in a number states a year ago and he supports efforts to “improve voter integrity” in a number of U.S. states.

“But the Constitution is very clear that elections are to be governed at the state level. The founders actually made that decision at the Constitutional Convention and the only role of the federal government was to open and count the Electoral votes that were sent by the states,” Pence said. “Now, I understand the disappointment in the election. You might remember I was on the ballot, but you’ve got to be willing to do your duty.”

Earlier in the evening during prepared remarks, Pence called January 6 “a tragic day” and, while Pence didn’t directly cite the attack on the Capitol, he did recite a Bible passage from Psalms to explain his actions on January 6.

“It’s important to note that every officeholder takes the same oath, to support and defend the Constitution of the United States against all enemies foreign and domestic…and as the ‘good book’ says, you’ve got to be willing to keep your oath even when it hurts,” Pence said. “George Washington said and so must this generation say: ‘The Constitution is the guide that we will never abandon.'”

Pence was the guest of the Young Americans for Freedom chapter at the University of Iowa. This was Pence’s second trip to Iowa this year. He’s on the list of  potential 2024 Republican presidential candidates who’ve made appearances here this year, a list that includes former President Donald Trump who held a rally in Des Moines in early October.