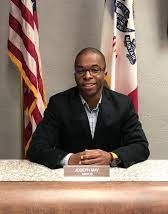 A northwest Iowa mayor who is running unopposed in today’s election has announced he’ll resign later this month. Estherville Mayor Joseph May announced at yesterday’s Estherville City Council meeting that he has accepted a new job in ministry, at a health care system based in Richmond, Virginia.

“The timing was not the best, but in the end we’re going to pursue the calling God gave us and I’m going to take care of my family,” May says. “That was a promise I made at the very beginning when I ran.”

May moved to Estherville seven years ago. He was elected mayor in 2019.

“I’m proud of the work that we did here as a city. I’m proud of Estherville, so we’re always going to be Estherville Strong,” he says. “I know things will get better, things will continue to thrive as we are seeing with the pool project, with the housing project…downtown being renovated with the beautification project and the things that we have coming forward…the streets project coming to a conclusion pretty soon. All those things are wonderful, so we gave our best. We gave our all.”

May is an Army veteran who holds degrees in theology and pastoral ministry. He’s been the director of mission for the Holy Family Hospital in Estherville since 2016. May plans to preside over the next two Estherville City Council meetings before leaving for his new job in December.

Estherville’s City Administrator says if May is re-elected today, as expected, the council will have the option of filling the position by appointment or holding a special election.