You are here: Home / Agriculture / Over 500 dogs being rescued from southern Iowa dog breeding operation 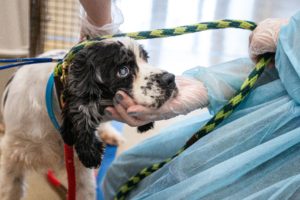 A coalition of groups is helping to rescue more than 500 dogs from a dog breeder in southern Iowa accused of dozens of animal welfare violations.

USDA inspectors say they found dogs in danger of starvation and death at the Maple Hill Kennel near Seymour. Kennel owner Daniel Gingerich agreed to surrender the dogs. According to a news release from the Animal Rescue League of Iowa, the rescue operation started in mid-October as 30 dogs in acute distress were removed from the property. Since then, more than 200 other dogs and puppies have been rescued and transferred elsewhere, while dogs that remain on the property are provided food and medical care.

The head of the Animal Rescue League of Iowa is praising the Department of Justice for shining a light “on bad actors” in the dog breeding industry. An agency in Kansas City that cares for abandoned and abused animals, the Wisconsin Humane Society and two national groups are assisting in rescuing and transferring the dogs