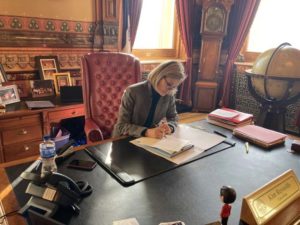 Governor Kim Reynolds announced early this evening that she has signed the lengthy bill that explains which county borders, highways, streets and roads are the new boundaries for Iowa’s congressional and legislative districts. The legislature overwhelmingly approved the new maps a week ago and Reynolds quickly announced she’d do so, too, whenever the bill reached her desk.

“I think it’s an indication that the process worked,” Reynolds said during a news conference in Carlisle on Wednesday. “Lots of fear-mongering about gerrymandering that certainly didn’t play out and never really could in the State of Iowa.”

The new maps for Iowa’s four congressional districts, 50 state senate districts and 100 Iowa House districts will be used for the 2022 election, all the way through the 2030 election. The redistricting process will start all over again in 2031 after the next U.S. Census.