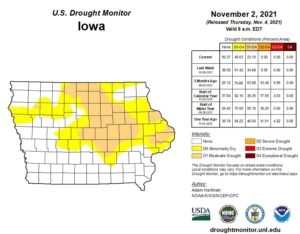 This week’s drought monitor shows that for the first time since July 7, no part of Iowa is considered to be in severe drought. State Climatologist Justin Glisan says Iowa has been in a “structural drought” since May of 2020.

Rainfall was as much as 10 inches below normal in some areas of the state — that is, until the steady rainfall in October.

“We’re not in a drought buster now, but we’re in a semi-drought buster,” Glisan says. “We’ve had anywhere from three to five inches over 14 days across much of western Iowa. You look at eastern Iowa two to three, even four inch totals — above average, of course. We’ve received precipitation amounts in two weeks that we would see in a a month and a half, especially in fall.”

Parts of the western U.S. have been in a long-term drought, but Glisan says those kind of sustained dry conditions are unlikely in the Midwest.

“On the west coast, they’re impacted by different weather patterns than we are in the central part of the United States. They’ve also had what we call the ‘mega drought’ along with heat waves, forest fires of a record that we haven’t seen before. When you have burn scars on the topography, you get rain events, that rain runs off, it doesn’t soak in and it perpetuates that drought,” Glisan says. “Luckily, in the central part of the United States it doesn’t look like we can get into a long-term, perpetual drought given the moisture gate from the Gulf of Mexico, but also the different air masses that impact us.”

Glisan made his comments during taping of “Iowa Press” which airs tonight on Iowa PBS.