You are here: Home / Sports / Two Cyclones recognized by Big 12 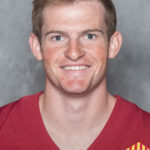 Both players earned their respective awards for the second time this season.

McDonald IV posted career highs in tackles (six) and sacks (2.5). He also had a forced fumble and a pass breakup. He also became ISU’s all-time career sack leader (27.5) in the victory and his 20.5 sacks since 2020 is the most in the nation. His 27.5 sacks is seventh all-time in Big 12 history.

Mevis was perfect again against Texas, making all three field goals and all three PATs. He drilled a 51-yarder in the fourth quarter, his second-longest kick of the season. It marks the first time since 2012 a Cyclone kicker has made two 50+ yard field goals in a season.

A native of Warsaw, Ind., Mevis has made 88.2 pct. of his field goals (15-of-17), on pace to be the second-best season clip in ISU history and is 9-of-11 on kicks from 40 yards or longer. His nine made field goals of 40+ yards are the most by a Cyclone in a season and ranks second nationally among FBS kickers.