You are here: Home / News / Axne says Iowa to get $5 billion from bipartisan infrastructure bill 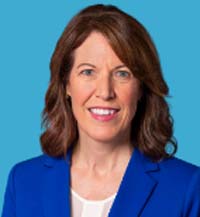 Third district Congresswoman Cindy Axne says the bipartisan infrastructure package that cleared the House late last week will provide $5 billion to Iowa for roads, bridges and water infrastructure as well as the repair of locks and dams. Axne says at least $100 million of that will be spent on broadband projects.

“Providing support for those in all parts of our state, urban included, who can’t afford it,” she says, “because access to the internet is about availability and about cost.”

Axne, a Democrat from Des Moines, was the only member of Iowa’s U.S. House delegation to vote for the bill. Republican Senator Chuck Grassley voted for it when it cleared the U.S. Senate in August. Republican Congresswoman Mariannette Miller-Meeks says she voted against it because it’s tied in negotiations to the so-called Build Back Better plan. That plan is expected to put hundreds of billions toward climate change and childcare costs. Axne says it aims to fix problems the infrastructure plan doesn’t.

“Not once have I heard: ‘Gosh darn it, I can’t get to work because a bridge is down,’ ’cause we’ll fix the bridge,” Axne says. “Over and over I hear: “I can’t find childcare and so I can’t get a job.'”

Axne says Democrats’ social spending package could come to a vote as soon as next week.

Axne, boosters of the ethanol industry, and officials from the U.S.D.A. gathered at Elite Octane in Atlantic today to discuss ethanol-related spending in the infrastructure package the House will vote on next week. Axne has pushed to include a billion dollars for ethanol infrastructure, like pumps that can dispense fuel that has higher percentages of ethanol, like E15 and E85.

“The Build Back Better Act provides an additional $2.8 billion in Rural Energy for America program,” Axne says, “…to make sure we help rural communities, in general.”

Elite Octane in Atlantic is getting a 250-thousand dollar grant from the Rural Energy for America program. The company plans to use the money to install an exhaust recovery system on its corn dryer — a project that will save the company more than a million dollars a year in electricity costs.