You are here: Home / Fires/Accidents/Disasters / Body found in river near Quasqueton 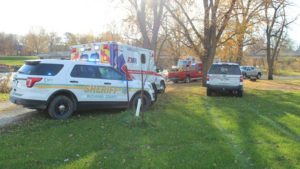 A body was pulled from the Wapsipinicon River near Quasqueton. ( photo from Buchanan County Sheriff.)

A body was pulled from the Wapsipinicon River near Quasqueton this morning.

The Buchanan County Sheriff’s Office says it received a 911 call shortly before 8:30 a.m. from fishermen in the area, who reported a body in the river just north of the bridge in Quasqueton. Deputies, firefighters and EMS personnel responded to the scene. The sheriff’s office says a man’s body was found and recovered from the river.

The body has been transported to the State Medical Examiner’s Office in Ankeny for an autopsy to identify the cause of death. The Sheriff’s Office says at this point, there is no reason to believe foul play is involved .