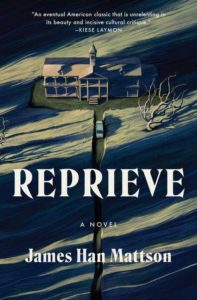 Iowans will have the chance to chat online this week with an author who’s winning national acclaim for his latest novel, one that crosses multiple genres and topics from racism to capitalism.

James Han Mattson, a graduate of the Iowa Writers’ Workshop, describes his book “Reprieve,” which the New York Times put on its list of “20 New Works of Fiction to Read This Season.”

“It’s about a murder that takes place in a full-contact haunted attraction, and if you don’t know what full-contact haunted attraction means, that means that the actors can actually touch you,” Mattson says. “The book essentially traces the lives of the characters that were there on the night of the murder, so it goes back quite a ways and it culminates in the murder.”

Mattson says he was originally writing a book about racial fetishism that was set in Thailand when he became “obsessed” about the idea of full-contact haunted attractions, especially from watching YouTube. “And so I started writing another book about full-contact haunts and somewhere along the line, I realized that the two books that I was writing went together so well thematically, so I just realized it was one book,” Mattson says, “so I weaved together the narratives and came up with what is now ‘Reprieve.'”

Many writers strive not to be pigeonholed into one type of literature, whether it’s thrillers, horror, or murder mysteries, but Mattson’s not too worried about that happening to him.

Born in Korea and raised in North Dakota where he still resides, Mattson attended the Iowa Writers’ Workshop at the University of Iowa from 2006 to 2008, and he offers much credit to the program for his success. “Oh, absolutely. Those were two of the best years of my adult life, being in the workshop,” Mattson says. “I attribute a lot to that time. I loved it there. I made my best friends there. I learned so much about just being a writer while I was in Iowa.”

Two central Iowa bookstores are hosting Mattson’s event on Wednesday at 6:30 p.m. via Zoom. Register to attend for free at the websites of Beaverdale Books in Des Moines or Pageturners Bookstore in Indianola, or here:
https://us02web.zoom.us/meeting/register/tZckfuiorz0qHNw7TO7jZPNCVPz6_IsY6YgX