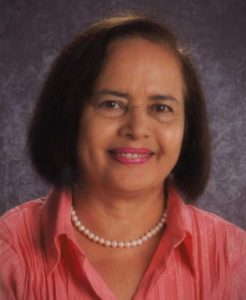 Family and friends who spoke at the service honoring the Fairfield High School teacher who was murdered last week used words like sparkle and joy to describe Nohema Graber. Her oldest son, Christian, read a note his mother wrote to herself before this school year started.

“I didn’t know what I was going to say in this moment,” he began, “but then I found this notebook in my mother’s study room and I thought I’d share a few words with you guys: ‘My plan is very simple and I think very powerful. My plan is to smile all the time. The reason is that I think a smile is contagious.'”

Graber, who was 66, wrote that by putting her intentions on paper, she would be aware of how others reacted to her smile. It took her son just over two minutes to read his mother’s words aloud.

“‘When I come back to work and I have difficult students, I will try to see them as they are: just young children. I will be aware that this is only just a temporary thing,'” Graber’s son read. “‘…We, the teachers, must be a positive role model for our students and even if the students forget about my Spanish classes, I hope they remember how and why to smile to life and to be honest.'”

A niece spoke next.

“She was a wonderful aunt by how she made life sparkle,” she said. “From her eyes literally sparkling when she’d give one of her full throated, full bodied laughs to way she would sparkle her words with such joyous inflection.”

Others in the crowd stepped forward to pay tribute, including former students like Lorena Hucke. “Everything that I remember about Spanish and about Senora Graber is just surrounded in positivity and happiness,” Hucke said, “and this pure joy that she shared.”

Mathew Johnson and Graber attended the same church in Fairfield. “She was a wonderful soul that brought many different cultures together,” Johnson said, “and I am just absolutely blessed and honored to have known her.”

Father Nick Adam of St. Mary’s Catholic Church in Fairfield led the service and concluded by expressing the community’s sympathy to Graber’s family.  “Nohema was deeply loved,” he said, “and she’s going to be deeply missed.”

Tonight’s event was held at Fairfield High School, where Graber had been a Spanish teacher since 2012. She was reported missing a week ago. Her body was found in the park in Fairfield where she often went for walks. Two 16 year old Fairfield high school students have both been charged in adult court with first degree murder.