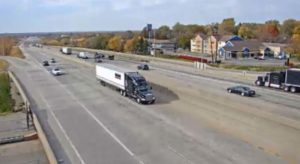 One thing for certain has returned to the way it was before the pandemic.

Iowa DOT spokesman, Stuart Anderson, briefed the Transportation Commission today on the traffic levels for October. “This month is the first month I believe that our overall traffic in the state of Iowa is above pre-pandemic levels on a monthly comparison basis,” Anderson says.

He says travel has been at a steady level until last month. “Our October 2021 vehicle miles traveled in Iowa was 1.5% higher than October of 2019. We’ve been very steady around that zero percent level,” he says.

Anderson says the traffic levels have varied a little bit based on which system you are looking at. “The county system had a nice bump in October — certainly the harvest season has impacted that,” according to Anderson. “Most importantly, overall traffic in the state is positive now.” Traffic levels had dropped around 44% in May of 2020.

He says rail volumes have increased some as well, but are still being held back by the supply chain issues. And air travel continues to rebound.