You are here: Home / Human Interest / Iowan ready to finally launch into space after two delays 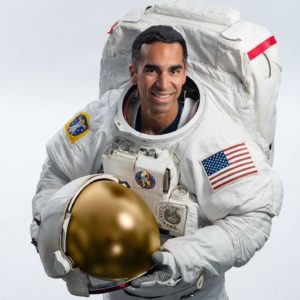 After two delays, Iowa astronaut Raja Chari is hoping the third time’s a charm as liftoff is now scheduled for tonight.

Launch of the Falcon 9 rocket was originally set for early on Halloween but it was delayed several days due to bad weather. The next delay was due to a crewmember’s illness. Now, launch from Kennedy Space Center in Florida is set for shortly after 8 p.m./Central time.

Chari, a Cedar Falls native, is the commander of the six-month mission. If all goes as planned, the crew of four will arrive at the International Space Station tomorrow. Chari is among the 18 astronauts named to the new Artemis team which is setting its sites well beyond the low-earth-orbit of the space station.

“The Artemis goal is to have people back on the Moon to stay by 2024,” Chari says. “We’ll have to build to that so there will be a mission prior to that to go around the Moon and test out the systems and then we’ll also continue to keep our presence on the space station, so there’s lots of different possibilities for me in the coming years.”

In a Radio Iowa interview last fall, Chari acknowledges he could be the first man since the late Gene Cernan of Apollo 17 to step foot on the Moon, but the modest Iowan is betting on his other NASA colleagues.

“It is, I guess, theoretically possible but I would put my money on someone else,” Chari says, laughing. “There’s much better qualified people in the office than me. That’s a great problem to have, to be working with people that, every single one of them, I’d say you should take them instead of me. That’s what I love about working here at Johnson and in our office, just the caliber of people.”

He joined the astronaut corps in 2017, being among a dozen candidates picked out of 18,000 applicants. Chari has degrees in aeronautics and astronautics from the Air Force Academy and MIT. He will become only the eight Iowan to reach orbit.