You are here: Home / News / Miller-Meeks to move, will run in Iowa’s new first district 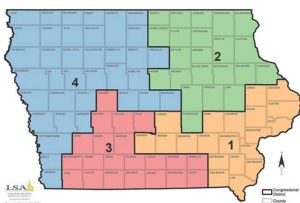 None of the four Iowans who currently serve in the U.S. House live in the new first congressional district. Miller-Meeks, who lives in Ottumwa, says she’ll move into the district, but hasn’t decided where yet.

The area includes the cities of Fort Madison and Maquoketa as well as Mount Pleasant, Fairfield, Newton, Oskaloosa, and Indianola. Miller-Meeks, who is an eye doctor, previously worked at an eye clinic in West Burlington and taught at the University of Iowa in Iowa City — two other cities in the district.

She’s also emphasizing that as the current second congressional congresswoman, she represents 16 of the counties in the new first district.

“My connection to this district is extremely strong and I never wanted people in this district to feel that I was betraying them,” Miller-Meeks said in a news conference this morning in Davenport.

Miller-Meeks told reporters she will continue to be an advocate for the people in her hometown of Ottumwa.

“I will their voice, regardless of what district I continue to represent,” Miller-Meeks said.

In 2020, Miller-Meeks won her fourth bid for a seat in the U.S. House by a six vote margin. In 2022, Miller-Meeks will face a possible primary in the new first district, as Bettendorf businessman Kyle Kuehl announced Monday that he’s launching a campaign for Iowa’s first district seat. Two Democrats are running in the district. State Representative Christina Bohannan of Iowa City is a University of Iowa professor. Joseph Kerner of Knoxville is a senior cultivator for the state-licensed medical marijuana manufacturer MedPharm Iowa,