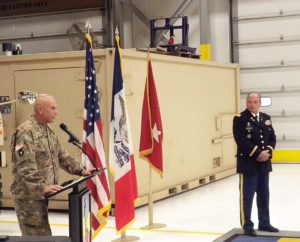 An Iowa National Guard member who joined after dropping out of high school has retired as the longest serving soldier in the organization.

Stephen Swisher retired in July as a Chief Warrant Officer Five — and was honored Wednesday in a ceremony in a repair bay where he worked for more than four decades.

Swisher, who is from Glenwood, says he had quit school in 1976 and was working at a furniture company delivering furniture. He says the repairman who worked at the company told him he needed to go into the military.

Swisher says his mom had to have a judge sign for him to join the guard because he was only 17. The tests showed he should be a mechanic — even though he didn’t have much experience at it.

“I did not no, living on the farm for a while being with my dad,  he had some mechanical aptitude, but he was more of a truck driver, but I just picked it up over the years and I continued to march with the mechanical and that’s what I do today,” Swisher says.

Swisher spent the next 44 years, 7 months, and 18 days repairing all types of equipment to keep his fellow guard members going. 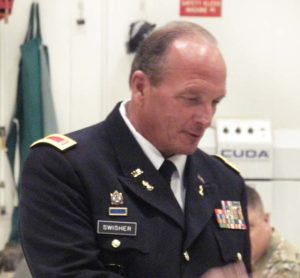 He never expected to serve that long. “I told myself, you know I can’t wait for my six years to be up, I am out getting of here. And yeah, 44 years later here I stand,” Swisher says.

Swisher says the professionalism of the National Guard has increased in the time since he joined as a young man. “The guard has totally changed from when I got in in the 70s to what it is today. And that has to do basically with how engaged the guard has gotten. We are pretty much considered active Army — I mean we can do what they can do,” he says.

World War Two era jeeps and trucks were the mode of transportation when he joined the guard. Through the years he saw the equipment change dramatically as well — and says the key was to keep up on the new technology.

“You’ve got to stay up on the information and the equipment, you’ve got to get yourself engaged in what you are working on. When you talk about in the military working on equipment — we are talking about power equipment, weapons, I did it all, Swisher says.

Swisher’s commanders credit him with keeping up on all the changes while being a teacher and mentor who trained other warrant officers who joined the guard. Swisher’s wife and family were also recognized for the support they gave him.

Swisher says he didn’t do much immediately after retiring in July — but has since started working for a trucking company.