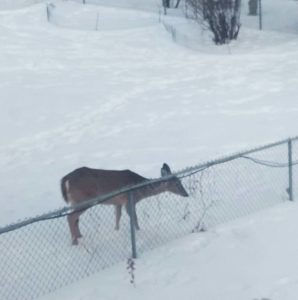 A deer browsing in a central Iowa backyard. (RI photo)

The DNR expert who oversees the state’s deer population tells the Natural Resources Commission they’ve been getting calls following reports on the results of a study of COVID in deer.

Tyler Harms says the Wildlife Bureau conducted the study after seeing studies in other states which found no COVID in deer.
“While the presence of antibodies indicates exposure to the virus — it does not necessarily indicate that animals become infected. So we participated in this study with Penn State University to investigate the question of active infection,” Harms says.

He says they tested 233 samples from deer that were collected to test for C-W-D and found 33 percent had active infections.
“We have received some questions from the public, and more specifically from our hunters about this study, given that we are in the midst of the hunting season. What we’ve been recommending to our hunters is obviously they keep hunting — and that this study should not rise to the level of concern that it keeps them from hunting this year,” according to Harms.

He says they do recommend that hunters continue the standard safety procedures whenever they are processing deer. “Like wearing gloves and thoroughly washing their hands and their equipment after field dressing the animal to reduce their exposure to this virus,” he says.

Harms also notes this about venison. “To date, there have been no cases of contracting COVID-19 from eating food, and that includes wild game meat,” Harms says. Harm says a COVID-19 study of deer in Ohio released this week found similar results to Iowa’s study. The early deer archery season is currently underway in Iowa. The first shotgun deer season will begin on December 4th.