You are here: Home / Fires/Accidents/Disasters / Train derails after hitting barge along the Mississippi River in Lee County 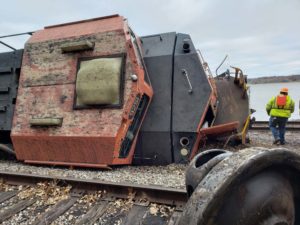 One of the engines of the derailed train. (DNR photo)

Cleanup is still underway following a train derailment in southeast Iowa’s Lee County, near Montrose, along the banks of the Mississippi River.

Caroline Davis, an environmental specialist with the Iowa DNR, says as hard as it may be to imagine, the freight train collided with a river barge shortly before midnight on Saturday.

“There was a barge that was parked or very near shore,” Davis says. “It’s unknown whether that was because of weather at that time. They were calling it ‘fouling’ the tracks, so essentially over the tracks, and yeah, the train came by and ended up hitting the barge.”

Davis says multiple coal cars were overturned and two diesel-powered locomotives derailed in the accident. “The BNSF folks said that approximately 1,400 gallons of diesel was spilled on the ballast material between two tracks,” Davis says, “and since that material is pretty porous, it has been seeping into the river.” 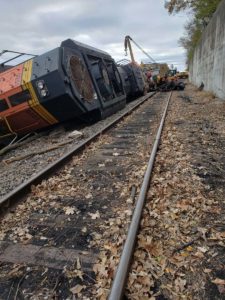 Work is underway to clean up the derailed train. (DNR photo)

Booms are floating in the river to keep as much diesel as possible from washing downstream, while Davis says “quite a bit” of fuel has already been siphoned up. Many tons of coal were also dumped into the river, which will be recovered, but Davis wasn’t certain how many coal cars overturned.

“I believe it was four but I’m still unsure about that,” Davis says. “When I was out yesterday, several, maybe two or three cars were completely crumpled so it was difficult to tell the exact number.” There are no signs of a fishkill and an environmental assessment of the accident is underway. It’s unknown when that section of rail line will be able to reopen.

“They hoped to have the cars and etcetera off of the tracks but they were having some issues getting the heavy equipment to upright the locomotives,” Davis says, “but they’re working real hard, real fast to get things cleaned up.” Despite the two locomotives tipping over, Davis says no injuries were reported.