You are here: Home / News / Moose believed to be from Minnesota wandering in Lyon County 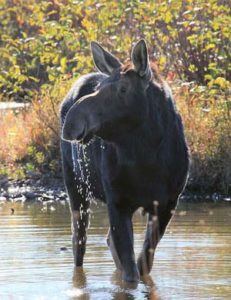 A moose has been sighted in northwest Iowa. Chris Larue of the Iowa Department of Natural Resources says it’s likely the same moose spotted in Luverne, Minnesota on Halloween.

“It apparently decided to wander down Main Street over there and a couple of days later it was sighted in Lyon County between Rock Rapids and Little Rock.” Rock Rapids, Iowa, is about 23 miles south of Luverne, Minnesota. Larue says it’s not unusual for moose to make their way into Iowa.

“It does actually periodically happen,” Larue says. “Since I’ve been here the last 20 years, this is probably the fourth or the fifth moose that kind of appeared in Iowa.” Larue is a biologist on the Iowa Department of Natural Resources wildlife management staff — working Lyon, Osceola, Dickinson, Sioux, and O’Brien Counties, the five counties in Iowa’s northwest corner.

Larue says the moose sighted in Lyon County is a young male. “Sometimes these things are just typical wanderlust,” Larue says. “Otherwise they could maybe have a little bit of a health issue which gets them disoriented and they can just kind of get headed into a direction until they figure out to head back to the habitat they’re supposed to be in.”

Moose typically stay near lakes, streams or swampy areas and they avoid warm climates. An adult moose can be 10 feet tall and weigh more than a thousand pounds. “We do encourage folks to let us know where they are when they see one because we don’t want them to get into a location that would be dangerous — near a highway or something like that,” Larue says. “Obviously we do not encourage people to approach them because they are very unpredictable.”

The antlers of an adult moose can weigh up to 40 pounds. Moose tend to have a heightened sense of smell and of hearing, but most moose have poor eyesight. A female moose was sighted in Plymouth County this past January.