You are here: Home / News / December party planned for new I-74 bridge completion 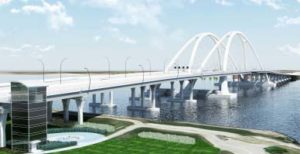 The Interstate 74 bridge construction team is planning a big party next month to celebrate the completion of a new, six-lane bridge over the Mississippi River at the Quad Cities.

The massive undertaking has been underway for more than four years. Project manager George Ryan says the project is coming in on time and within budget.

On December 1st, the public is invited to take a walk on the east-bound bridge between Moline and Bettendorf, while those Illinois-bound lanes will open to traffic a few days later. The old, Illinois-bound side of the original twin bridge will close the same day the new one opens.

“We realized that during the process, it’s inconvenienced people in the Quad Cities, so there have been pluses and minuses,” Ryan says. “We appreciate all of the motorists having so much patience with us. It’s worked out to be really nice and it’ll be so safe for years to come.”

Landscaping and other parts of the project will continue into next year, including an elevator in Bettendorf and decorative glass for the trail outlook. Construction started in July of 2017 and the project cost $1.2 billion.

Details about registering to attend the celebration on December 1st are available at “I 74 river bridge dot com.”