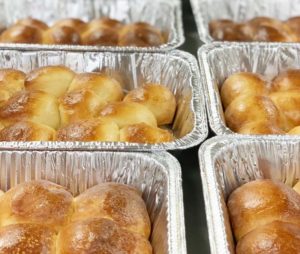 Students at the Iowa Culinary Institute’s Baking & Pastry Arts Program at the DMACC Newton Campus are using the upcoming holiday as a learning experience.

Chef Ryan Binney says they are selling Thanksgiving Dinner rolls and have had to learn about the whole process beyond baking. “We ran into some glitches in finding things. I involved the students in trying to order up all the ingredients and get everything in in time. Especially with the supply issues that we are going through right now — it’s definitely a challenge — and I want them to know what that looks like in the real world,” Binney says.

It is the second year of the program and they are selling the rolls by the dozen in either white or whole wheat. “Both of the rolls are made from scratch, there’s no preservatives at all,” according to Binney. “They are a lot better for you. They don’t really keep for a long time — so I would say if you have extra you can freeze them. I find that most people eat them all on Thanksgiving — or make some sandwiches after.”

The rolls cost $6 for a dozen and they come in a foil pan to make them easy to heat up. But Binney says these are much better than the traditional frozen rolls you buy to heat up for dinner.

“A lot of times the students are surprised when you take all those preservatives and enzymes and stuff out of there just how good it actually tastes when you are actually tasting the wheat and the fermentation and the alcohol,” he says.

The Baking and Pastry Arts program is a one-year course. “So in the fall, they take artesian breads and fundamentals baking. And in the spring they take plated desserts and international pastries. And in the summer they take chocolate and sugar and cake decorating,” Binney says.

The money raised from selling the rolls is used to send students on a trip to a baking exposition show. Binney says there is a great demand for their skills in the food industry.

“Students that I graduated in August, they are landing some of the top jobs in Des Moines and beyond,” he says. “I had a student who got a job offer at Disney and students who are really excelling in the field and becoming successful pastry chefs and bakers.”

Online orders for the rolls are being accepted now through noon on Monday, November 22nd. You can order by visiting baking.dmacc.edu. Rolls will be available for pickup between 10 a.m. until noon on Wednesday, November 24th at either the DMACC Campus in Newton or the DMACC Urban Campus in downtown Des Moines.