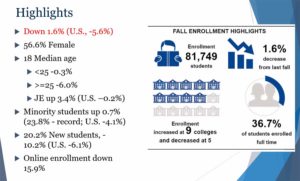 The pandemic and the tight labor market are cited as two of the main causes for a drop in community college enrollment in Iowa.

The Iowa Department of Education’s Community College administrator Jeremy Varner. “Our enrollment at our 15 community this fall is down about 1.6% from the prior year — bringing us to about 82,000 students,” Varner says. “While that enrollment is down — national fall enrollment at community colleges is down about 5.6%.”

Varner says it wasn’t an across-the-board drop. “Nine of the 15 community colleges actually saw gains this fall. A lot of what is going on there are institutions sort of adjusting to disruptions from the pandemic last fall. So, some of the colleges that saw the biggest dips last fall are seeing things sort of evening out a bit,” he says.

Varner says the economy and job market have a big influence. “I always say when I am talking about our community colleges, community college enrollment is in a substantial part countercyclical, meaning when the economy is very tight, folks are looking to get into the workforce. And during recessionary periods we have more students coming back looking to get more training,” according to Varner.

He says a decline in high school graduates deciding to go to college also plays into the enrollment issue. They track that by the number of high school students who sign up for the free college aid availability assessment.

“Those trends have been generally downward — which is a bit worrisome. So, we are watching that and generally how students and families think about college,” Varner says.

One unusual change saw a drop in female enrollment. “Because the national trend there is actually for the male students to be falling off. Instead, we saw female students slip about three percent,” Varner says. “since about 1980, roughly 40 years, we had this roughly a 60-40 split. We were surprised to see male students increasing this fall.”

Female students still make up 56.5% of community college students, while males moved up to 43.5%.  Minority student enrollment was up slightly.

The Des Moines Area Community College saw the largest decrease in students at around 11%, followed by North Iowa Area at a seven-point-four percent drop. Iowa Lakes held steady, while Iowa Central in Fort Dodge had the largest increase at nine-point-eight percent. Other enrollment drops saw Northeast Iowa down .1%, Iowa Valley down 2.8%, Iowa Western down 1.7%. Other increases saw Northwest Iowa up 2.2%, Eastern Iowa up %.4%, Kirkwood up 2.7%, Western Iowa Tech up 1.7%, Southwestern up 2.6%, Indian Hills up 3.2%, and Southeastern enrollment increased by 2.7%.