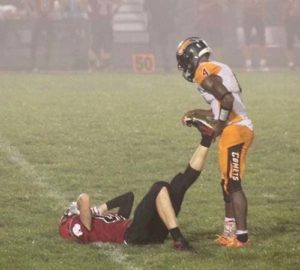 A photo went viral this fall of an Iowa high school football player helping a player from the opposing team stretch his cramped-up leg — and both boys are stunned by the sudden fame.

They’ll attend an awards event together in St. Louis this weekend. Marc Schreiber, executive producer of the Musial Awards, says the photo will be highlighted as a great example of sportsmanship.

“When a player goes down in football, it’s not often that it’s the opponent that’s the lone person out there coming to the aid of his opponent to help him out,” Schreiber says. “That was powerful in itself. What really strikes us is that photo. It’s just such a wonderful image. You just look at it and it instantly conveys sportsmanship.” 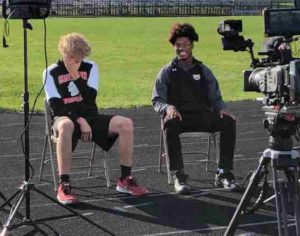 Hoefer and Steinlage on GMA.

The game was between Charles City and New Hampton on September 3rd. The photo shows the Comets’ Mario Hoefer helping out the Chickasaws’ Carter Steinlage. The encounter already won the players a joint interview on ABC’s “Good Morning America 3.”

Schreiber says they’ll get more national TV exposure after the Musial Awards are presented before a live audience Saturday. “We package it into a one-hour special, so Mario and Carter will be featured in that,” he says. “It airs on CBS around the country on Christmas Day, sort of the perfect show that connects to the holiday spirit. It will air at 4 o’clock Central time.”

The sportsmanship awards honor Cardinals’ baseball legend and Hall of Famer Stan Musial. They are coordinated by the St. Louis Sports Commission which will cover the air travel, hotel accommodations and ground transportation for Hoefer, Steinlage, and their parents.