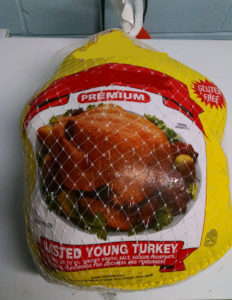 There are a lot of ways to cook a turkey and but the director of the Iowa Culinary Institute at Des Moines Area Community College (DMACC) says every method has one goal. Chef John Andres says that’s to keep the meat moist.

“You are always kind of in a battle between getting the outside of your turkey nice and caramelized and roasted — and at the same time, you want to retain moisture in the meat. And you’re literally cooking it from the outside inward, not overcooking the outside while getting the inside to a safe internal temperature,” he says.

Andres started cooking at country clubs where they may’ve had as many as 80 birds going at once. He says regardless of how many you cook — two things figure in for continued success.

“Careful timing and taking good notes from year to year, I guess from a professional chef’s perspective,” Andres says. There’s one thing he likes to do at the start.

“A lot of the advice you’ll hear for home cooks is to make sure you brine your bird,” Andres says. “And I think even if you purchase a bird that has already been brined, it doesn’t hurt to do your own brine on top of that. Because usually, it’s a small percentage of salt solution that they have already used. But that is something to keep an eye on that kind of effects the meat and might show something different in the meat as you cook your bird.”

Most people cook their bird the traditional way — but there is one trendy technique that’s hot right now. “You hear a lot about Sous Vide, and that’s kind of a fun technique where you seal up the meat up in a bag — the French translation from Sous Vide would be under vacuum,” according to Andres. “And you can infuse different flavors –whether it is herbs, garlic, things like that, butter in the bag with your meat. And then you cook it slowly.”

Another technique is called Roulade. “Cut the breast meat off the turkey. In fact, if you do it carefully, you can even keep the skin on it. And then you can open that up a bit and maybe pound that meat down so you’ve got a nice even thickness, and you can stuff it with really anything,” he explains. He says the stuffing you wrap the meat around can include some of the traditional stuffing, or apples and other fruits, and even your favorite vegetable.

Andres says he likes the traditional sides to go with his Thanksgiving turkey. But, he has a fresh take on the old standby green bean casserole and makes it without canned mushroom soup. “I’ll make a mushroom soup, a cream of mushroom soup myself with extra mushrooms. Really caramelize those mushrooms and concentrate the mushroom flavor, add some thickened cream sauce to that and then blanch some fresh green beans, or fresh French cut green beans to mix all together.”He says caramelize fresh onion to go on top.

Andres says there are a lot of different recipes available online. “I tell people to be careful when you are looking out on the internet — because there is some junk out there too,” But if you find some good videos that show the process, that show the outcome — really your goal then as a home cook is to just the seasoning as you go…and as long as it is not too far off the wall, you’ll end up with a good product.”

Andres says now that he is teaching he enjoys being home to make his own Thanksgiving dinner for his family instead of having to be away and cooking for others.