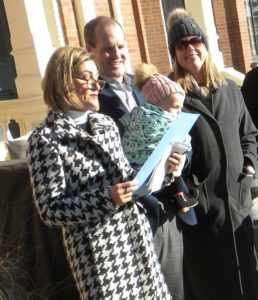 Governor Kim Reynolds says her administration just got the district court ruling that blocks the state’s ban on Medicaid coverage for transition-related surgery for transgender Iowans — and it is under review.

The governor says the state is in much better shape heading into Thanksgiving this year compared to one year ago — despite recent increases in COVID-19 cases and hospitalizations. Reynolds says COVID hospitalizations were nearly 1,5oo last year and are now around 597. She says there are also more people vaccinated.

“The numbers continue to go up — so that’s positive. We’re seeing a lot of the pediatric vaccines are being administered and we are seeing some families that are taking advantage of that. And we have a good number of people who have had COVID who have natural immunity, and that’s part of the equation also,” Reynolds says.

Reynolds says she hasn’t gotten a COVID booster yet — but plans to do so. She has gotten a flu shot. “I want to encourage people to do that because we were kind of isolated last year. And so we anticipate that this could be a really bad flu year,” she says. “So, people should take advantage of the flu shots.”

A reporter asked her if she is confident the $5 billion coming to the state from the recently passed federal infrastructure bill would be spent appropriately.

“Why wouldn’t we be confident that that money would be spent appropriately? That’s a ridiculous question. A lot of it is a sup-up (supplemental appropriation) from existing programs that are already in place. There’s some of the money that’s not that can be utilized on new programs. We are waiting on them to give us the criteria on how the money can be spent,” Reynolds says.

Reynolds says that is not the biggest concern with the federal money. “I tell you what we do need to think about though is the amount of money that is being spent in Washington, D.C. The impact that that has on inflation, the impact that that has on working families trying to make ends meet. Tax and spending policies are going to continue to drive inflation — and that has an impact on hardworking families,” according to Reynolds.