You are here: Home / Fires/Accidents/Disasters / Iowa falls short of goal of below 300 traffic deaths 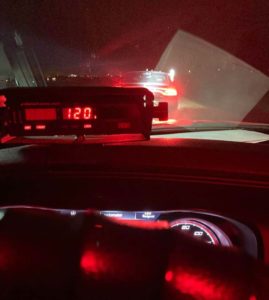 Many thousands of Iowans will be traveling long distances this Thanksgiving week and a few of them likely won’t make it home.

Brett Tjepkes, chief of the Governor’s Traffic Safety Bureau, says too many motorists are giving in to the temptation to speed, and some are risking their own lives and those of everyone around them by -doubling- the speed limit, and worse.

“One-hundred-ten, 120, we’ve seen speeds even in the 130s and 140s on some of those,” Tjepkes says. “It’s not just the state patrol. These are law enforcement officers all over the state that are seeing these dangerous driving behaviors.”

More than 312 people have died on Iowa’s roads so far this year, which is at least 26 deaths more than at this time a year ago. Tjepkes says speeders are causing a significant number of deaths and injuries.

Iowa law enforcement had hoped to keep this year’s traffic deaths below 300, a figure that hasn’t been seen in decades. “The under-300 goal is really an incremental goal. What we’d really ultimately like to see happen is that nobody dies in traffic-related crashes,” Tjepkes says. “Someday, I think that could possibly be a reality with engineering, education, and enforcement.”

In 2016, the state recorded more than 400 traffic deaths, while the worst year in recent history was 1995 with 527 traffic deaths. Seat belt use, Tjepkes says, can reduce the risk of injury or death in a crash by 45%