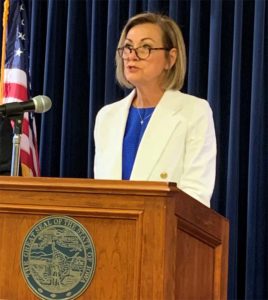 Governor Kim Reynolds says they are getting the documentation together to provide justification for spending $450,000of federal COVID relief funding on staff salaries last spring.

“I just want to remind people that that was March, April, and May. That was when we just didn’t know a lot about the pandemic. We were working seven days a week….we had a morning meeting, I did a press conference every single day to let Iowans know what we were working on,” Reynolds says.

Reynolds is a Republican and Democrat State Auditor Rob Sand released a report last week accusing her of improperly using the funds. Reynolds says they had to be sure the state had all the ventilators, supplies, and tests needed, and that took all of their time.

“They said that it’s an allowable expense — they just need the documentation. We’ll have no problem providing them with the documentation that they need. Because that’s what we were doing,” she says. Reynolds says most governors and their staff were doing the same thing across the country as the pandemic took hold.

“Projections were horrific, and we were doing everything that we could to make sure that Iowans were safe and secure and that we weren’t overwhelming our hospitals,” Reynolds says.

Auditor Sand accused the governor of trying to hide the use of the money because it wasn’t listed as an individual department expense for the employees who worked on her team. “Because we were working on COVID 100 percent of the time we didn’t think that it was fair for the agencies to pay for the team — because we weren’t working on policy-specific issues that were related to each one of the agencies. We were actually working on COVID,” according to Reynolds.

The governor says all the supporting information will soon be ready soon to send to federal officials to verify the use of the funding.