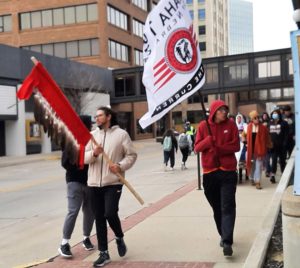 Co-organizer Terry Medina says the march remembers the Native American children who have been removed from their homes since the 1880s and placed into foster care.

“I was thinking this morning about the children who never came home. Thinking of their families. I am always trying to preach the word of forgiveness, then thinking about these families who lost a son, daughter, grandchildren. It’s hard to let it go,” Medina says.

He says the march is a time of healing for everyone. “That was our theme this year — Heal the People. In Indian country, it seems like we are always mourning. We are in mourning because of the loss of a relative, a child, heartbreaking,” Medina says. 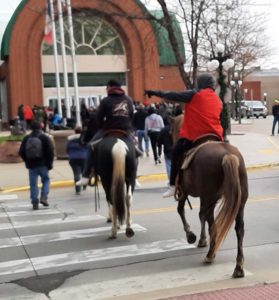 “When are we going to take responsibility for ourselves? And I think of my father a little bit to unify under a cause — but then it’s gonna translate between the marches,” he says. “And so, I really hope that we are able to do that. Our allies that have helped us with this over the last 19 years are waiting for use. We were waiting for them — now they are waiting for us.”

Tribal members and supporters shared a meal after the march.