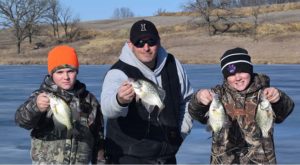 State regulations require that certain types and lengths of fish caught in many Iowa lakes and streams be immediately released back into the water.

In other bodies of water, fish that aren’t big enough — as well as older, longer fish — have been thrown back in.

Ben Wallace, a fisheries biologist for the Iowa Department of Natural Resources, says starting January 1, 2022, people who fish in Storm Lake will be able to keep slightly longer walleye.

“What we feel that will do is probably increase harvest of walleye by about 40%,” Wallace says. “…We feel anglers are really going to like this. They’re going to be able to keep some really nice fish.”

Wallace says it takes about two and a half years for a walleye to reach the length of 17-and-a-half inches in Storm Lake. “The max age of a walleye we see in Storm Lake is about 13 years old,” Wallace says. “We can tell that by counting the rings on their spines or their ear bones, compared to West Lake Okoboji where they get up to 18 or 19 years old.”

Wallace says mature walleye in West Lake Okoboji can be 30 inches or longer, but he says there probably aren’t walleye that long in Storm Lake. “I’m not saying there’s not 30 inch walleye in this lake, but I’ve personally never handled one,” Wallace says. “I’ve handled a 29.8 incher. No matter how hard I squeezed, I couldn’t get it to 30.”

Wallace recently briefed the Storm Lake City Council about lake conditions. Storm Lake is the 4th largest of the 34 natural lakes in Iowa. The state will let anglers catch brown trout in South Pine Creek starting January 1st, for example, to reduce competition with brook trout. Walleye catch limits are changing at Clear Lake and the Iowa Great Lakes as well as Storm Lake on January 1, 2022.