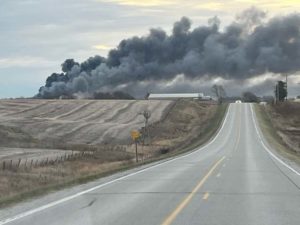 Little information is being released about the weekend fire that swept through a Taylor County egg production plant.

Firefighters from multiple agencies batted a massive fire Saturday at the Iowa Cage Free plant in Clearfield. Fire was reported at the 136,600 square-foot facility shortly after 7:30 a.m.

Departments from Clearfield, Bedford, Gravity, Sharpsburg, Lenox, Diagonal, Page County, Union County and Ringgold County were among those responding under mutual aid, and were at the scene for several hours. Reports indicate all employees escaped the burning complex safely.

Smoke billowing from the plant was visible for several miles. There’s no word on the fire’s origination or cause, or the extent of damage.