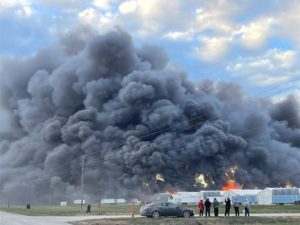 Clearfield Mayor Chris Knox is hoping an egg production facility that was heavily damaged by fire this weekend will be able to recover.

Knox says he noticed the plant burning at around 7:30 Saturday morning — and most of the facility’s employees were standing outside when he drove by. The mayor says the gusty winds made for what he called “a scary deal.”

“The wind did pick up pretty strong there Saturday afternoon,” he says. “It was blowing right towards town at that particular time, and there was a pretty big concern about starting a cornfield on fire right to the east side of where the fire was. From there, it could have carried into the town of Clearfield.”

Knox says the facility was bought from Iowa Cage-Free last month and is now known as Hen Haven Fire crews brought the fire under control by about 6 p-m Saturday–but not before it caused considerable damage.

“One complete hen house was burned clear to the ground. I would estimate it to be 700-to-800 feet long. It took it completely down. From there, the barn was connected by breezeways to the processing facility, and to the office space, and I believe to the distribution center. The processing, the office space, and the distribution area were all completely damaged, as well,” according to Knox.

It’s believed hundreds of thousands of chickens died in the fire. Know says the plant employs up to 70 people and the fire is a big blow to more than just the facility’s workers.

“It goes to people supplying the facility with feed resources and other resources,” he says. “It doesn’t even affect just the employees, it affects everybody that has ties to that business, as well. It would be really great if we could salvage what we can out of the mess, and continue to have that for the community. It really would.”

Knox praised fire departments from surrounding communities for their assistance in battling the fire. There’s no word on what caused the fire. None of the facility’s employees were injured, but Knox says two firefighters reportedly were treated for smoke inhalation.