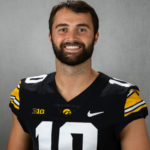 Iowa senior kicker Caleb Shudak has been named Big Ten Conference Special Teams Player of the Week for his play in the Hawkeyes’ 28-21 win at Nebraska.

The native of Council Bluffs connected on all four field goal attempts against Nebraska, connecting from 51, 48, 36, and 44 yards. The four made field goals matches a career high, set the previous week in Iowa’s 33-23 win over Illinois.

Shudak had made a career-long 51-yard field goal in three different games this season, including wins over Iowa State, Illinois, and Nebraska. For the season he has made 22-of-25 attempts with just one miss from less than 50 yards.

For the season, Shudak leads the Hawkeyes in scoring with 100 points, adding 34-of-34 PAT attempts to go with his 22 made field goals. Shudak’s 100 points rank as the eighth-highest single season total in school history. He also handles kickoff duties, recording 39 touchbacks.