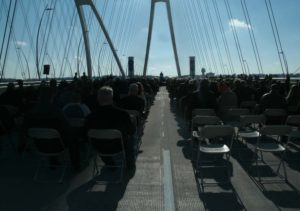 The Interstate-74 bridge over the Mississippi is celebrated. (photo bt Michele O’Neil)

Hundreds of pedestrians celebrated completion of the new Interstate-74 bridge over the Mississippi by walking across the span Wednesday.

Every mayor in the region was there for the event, including Bettendorf Mayor Bob Gallagher. “Thanks to the contractors, the local construction experts, and all who worked on this wonderful project,” Gallagher says, “through a record-setting flood, a derecho, and a polar vortex, not to mention the pandemic.”

Construction on the six-lane, two-span bridge began in 2017. Westbound lanes opened a year ago. The eastbound lanes are scheduled to open next week. The bridge project includes a highway between Bettendorf and Moline and cost more than one-point-two billion dollars.

East Moline Mayor Reggie Freeman says the old, green I-74 bridge was built in 1935 for horses, carts and pedestrians. “What are we looking at today? From 4,000 vehicles going across that bridge when it was first built years ago to today, to somewhere around 80,000 cars a day?” Freeman says. “We’ve come a long ways, baby, we’ve come a long ways.”

Iowa Governor Kim Reynolds wasn’t able to attend the ceremony and sent a written statement to mark the occasion.