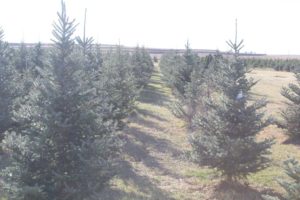 One Iowa Christmas tree grower says supplies are already getting short as we enter the first weekend of December.

Robin Miller of rural Hawarden owns of T & S Christmas tree farm in Plymouth County. She says the demand for real trees has been. “Because of the high demand in the last few years, I will be closed after this weekend,” Miller says.

Miller says a new generation wanting to make family memories has led to an increase in demand for real Christmas trees in recent years. Miller says most people prefer to pick a tree that stands around seven feet tall. She says it takes between eight and ten years to grow a tree at that height.

Miller has a gift shop and says another product has been very popular. “Boy this year we’ve had incredible wreath sales — I think we are up to 700 wreaths we’ve made — probably a 120 left, maybe not even that many,” according to Miller. “And you know, that’s also affected by the shortage of trees that we are seeing. I have a shortage of foliage. I wish I could have all the products I normally do, but I just don’t, due to the lack of access to the foliage.”

Miller says the warm weather hasn’t kept people from being in the Christmas spirit, and sales of trees have not suffered. “Doesn’t hurt me at all. A lot of times I hear people say ‘wow this weather is amazing, I remember that year with four feet of snow, a giant mudhole’, it’s kind of nostalgic in a way when people are reminded of other years when it was not so nice,” according to Miller.

The T & S Christmas tree farm is located about 20 miles northwest of Le Mars, and 25 miles north of Sioux City.