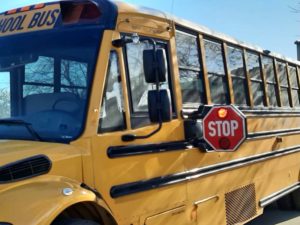 School bus drivers in Sioux City have been seeing an increase in motorists ignoring the extended stop sign and flashing lights when a bus is dropping off or picking up students.

“The majority of our buses have stop arm cameras on them. So even if our drivers are unable to physically view the stop arm violation happening — they will come into my office and let me know that one has occurred — at which time I can pull video from the bus,” Wellenstein says.

The video allows the district to get the license plate number, make and model of the car, and sometimes a view of the driver. That information is turned over to police.
“Ninety-nine percent of the time we are able to catch folks with correct info. And then at that point in time, the police department goes and sends out a citation to the owner of the vehicle for a first offense violation of the stop arm. It is 465 dollars,” he says. “I think there’s quite a few people who don’t know the money involved in a stop arm violation.”

Wallenstein says the number of violations is way up. “Right now I am having to pull video for stop arm violations at least a couple of times a week,” according to Wellenstein. “Previous years — it has been hit and miss — you might have one every other week. Sometimes one every three weeks. But this year it seems like it has just been reoccurring, over and over.”

Wellenstein says drivers are placing students in danger when they ignore the stop sign and pass a stopped school bus. A driver who gets a second citation for the offense will have their license suspended and have to take classes to get it back.