You are here: Home / News / Heaviest snow of the year expected in some counties 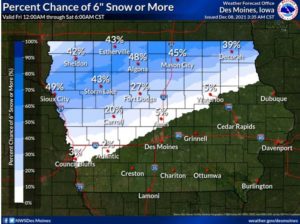 NWS projections for areas with 6 or more inches of snow.

Forecasters say the first significant snowfall of the season is headed toward Iowa and 22 counties across the state’s northern third are under a Winter Storm Watch.

Snow has already fallen a couple of times in various parts of the state in recent weeks, but this storm promises to be widespread and could potentially paint all but the Keokuk area in white. 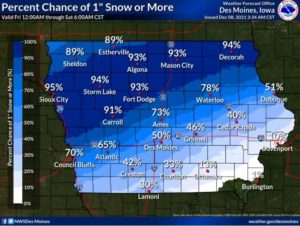 Some areas could get one inch or more of snow. (NWS graphic)

“Impacts from the storm are going to be the snowfall, of course, but we also have some wind coming in on the back side of it and visibilities will probably be dropping down as well later on Friday afternoon and evening,” Vachalek says. “You’re really going to want to watch this carefully. We haven’t driven for quite a while in this type of weather and people need to be very, very cautious.”

Folks in parts of southern and central Iowa enjoyed unseasonably warm temperatures last week, with highs in the 60s and near 70. This week is shaping up to be quite chilly, as we’ve had to break out the winter coats, hats and gloves, but the weather  rollercoaster will go back up next week.

“The snow that falls on Friday, in many cases, may all be melted by next Wednesday or Thursday, as high temperatures rebound into the 50s even as far as northern Iowa,” Vachalek says. “This is very unusual. We call it a high amplitude pattern where we get some big changes or big swings coming into and out of the state.”

With next week’s predicted warm-up, Vachalek says it’s difficult to predict whether any of Iowa will see a White Christmas. We’ll have a better view of the probabilities in another week.