You are here: Home / News / Winter Storm Warning out for northern half of state 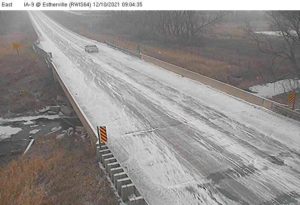 The flakes are already flying in northwest Iowa as the first significant snowstorm of the season is beginning to move across the state.

Nineteen counties stretching across northern Iowa are under a Winter Storm Warning, with advisories covering the entire northern half of the state. Meteorologist Cory Martin, at the National Weather Service, says the snowfall will intensify as the day goes on.

“Especially as we get into the afternoon and into the early evening, it may be heavy at times and we could be looking at an inch per hour snowfall rates in some areas,” Martin says. “Up near the Minnesota border is where we’re expecting the heaviest snow. Up there, we could be looking at nine or ten (inches), with pockets of even heavier snow, but the heaviest will stay up in Minnesota.”

Depending on the temperature, some areas of the state could see snow mixed with rain and sleet, bringing icy roads and an iffy commute home later today.
“Folks, if you have any travel interests today, especially if you’re going up through northern Iowa, check ahead on weather conditions and be prepared to take it slow,” Martin says, “and be prepared for hazardous driving conditions.”

Iowa’s been experiencing some odd rollercoastering in its temperatures in recent weeks, and December’s apparently no different. Martin says it’s possible much of the snow that falls today will be melting very soon.

“We’re certainly going to put a dent in whatever snowpack we get, especially next week as we warm up,” Martin says. “We’re going to have a very unusually warm air mass overspread much of the central part of the country as we go into next week. We’re looking at highs in the 50s and 60s possible which may set records in a few places.”

The odds for a white Christmas in Iowa are still in question, given the wide temperature swings we’ve been seeing. Forecasters should have a better view of the long-range holiday forecast by the middle of next week.