You are here: Home / News / Tonight expected to have clear viewing of Geminid meteor shower 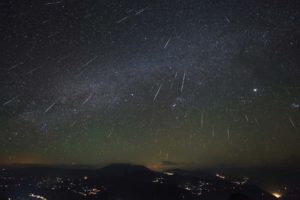 Mostly clear skies are in Iowa’s forecast for tonight (Monday), what’s expected to be the best night for viewing the Geminid meteor shower — and a bonus comet.

Professor Siobahn Morgan, who heads the University of Northern Iowa’s Astronomy Department, says don’t worry about bringing binoculars or a telescope. Just find someplace away from city lights, bundle up, stretch out and look up.

“The Geminid meteor shower is best viewed after midnight. Generally speaking, you want the moon out of the way,” Morgan says. “This is when the earth enters the cloud of bits and pieces of a comet that passed by years ago.”

Viewing this year should be ideal as the shower is peaking when the moon is nearly new, so the skies will be darker. It’s called the Geminid meteor shower because those “shooting stars” appear to be coming from the constellation Gemini. 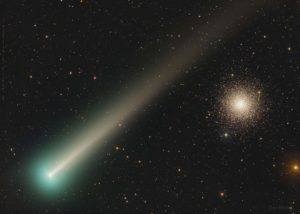 “Most people are familiar with Orion and Gemini is northward or up above Orion and slightly to the left,” Morgan says. “It’s close to being overhead in the night sky and you don’t want to look in any one direction. Just look around the sky.” There should be about 60 meteors per hour, or roughly one every minute.

The comet Leonard should also be visible tonight, but it won’t be quite as easy to spot, and you -will- need a viewing aid to pick it out. “Comets tend to look a little bit fuzzy,” Morgan says. “That’s the key give-away. They can be rather fuzzy and a little bit off in their color. They could be rather bluish or greenish. It’s not the most spectacular bright or easy-to-view one. This one, you’d definitely need binoculars.”

Leonard may best be seen in the early evening, just below and to the left of Venus.