You are here: Home / News / High wind warnings and watches issued for Wednesday 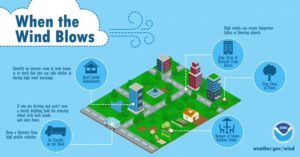 Damaging winds are possible across much of Iowa tomorrow and forecasters are urging Iowans to be cautious when driving. State Climatologist Justin Glisan says a high wind warning has been issued for much of the state.

“We don’t see these warnings very often, I think anywhere from five to seven times over the last 20 to 30 years have we seen those types of warnings,” Glisan says, “so sustained winds out of the south, southwest basically 20 to 45 miles per hour and then gusts anywhere from 55 to 70 miles per hour.”

Driving, particularly on highways that run east to west, will be difficult in those conditions.

“If you don’t have to travel, it might be better not to travel, but if you do, keep both hands on the wheel and stay vigilant as you drive,” Glisan says. “We’re going to have strong winds that are not associated with thunderstorms start in the afternoon, but then we have a line of possible stronger to severe thunderstorms that will come through during the evening hours.”

“Perhaps the silver lining is there are not a lot of leaves on the trees anymore. The folage has dropped. Those leaves act like sails or nets for that wind to grab onto and you get more swaying of trees, so luckily less leaves on the trees, perhaps that may prevent more damage from these higher wind gusts that are forecasted.”

As for more violent weather — like a tornado — Glisans says the winds are expected to change directions tomorrow.

“That produces rotation in the atmosphere,” Glisan says, “but we’re having such strong winds through the atmospheric column that we’re not exactly sure whether that’s too much wind shear and that would prevent those tornadoes from happening.”

Temperatures tomorrow may set records, as highs in the 60s and 70s are in the forecast.

“December’s statewide record high in 74 degrees and seeing some of these 70, 72, 73 degree possibilities,” Glisan says, “it’s going to be a very warm and windy day tomorrow.”

The National Weather Service has issued a high wind warning, starting at 3 p.m. Wednesday, for the western 2/3rds of the state, with the eastern third of Iowa under a high wind watch. Widespread power outages are expected. Due to a lack of snow cover, dry conditions the wind, fire weather watches have been issued for Pottawattamie, Mills, Montgomery, Fremont and Page Counties in Iowa from noon Wednesday to 9 p.m. Thursday.