You are here: Home / Fires/Accidents/Disasters / Investigators trying to determine cause of Malvern fire 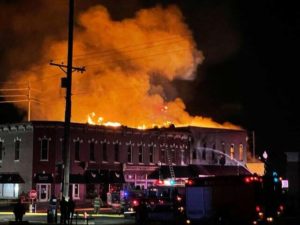 The investigation is underway into a fire that gutted a downtown Malvern business Monday night. Agencies from four southwest Iowa counties responded to the fire at Mulholland Grocery.

Mills County Emergency Management Coordinator Larry Hurst says the county’s communications center received a call shortly after 5:30 p.m. from a store employee reporting a fire in the back of the building. “I think they initially had thought that somebody had reported to them, ‘hey, there’s a fire out back of your store here,’ and they thought it was some sort of trash–cardboard, or something,” said Hurst. “So, they attempted with fire extinguishers to go out and put it out. They soon realized it was into the building, and was bigger than they thought, and they called Mills County Communications.”

After establishing a command center upon arrival, Hurst says Malvern firefighters realized they needed help from surrounding agencies. “Once they sized the scene up,” he said, “they realized that they had not only Mulholland Grocery getting engulfed in flames from the lower level to the main floor and up above, but also a threat to adjoining businesses that were to the south and north. So, it quickly generated additional calls to Mills County Communications, asking for additional responses from not only in the county, but within a four-county area, basically.”

Twenty-nine area agencies responded to the scene, including 22 fire departments, three rescue units, two emergency management agencies and Mills County Sheriff’s Office. Hurst says securing adequate water supplies was a major challenge.
“We ended up hauling water from multiple areas from Glenwood, Emerson, Tabor, and of course there in Malvern, and Hastings,” said Hurst. “In fact, because of the water in Malvern, we were putting a large demand on their system.”

Hurst says firefighters brought the fire under control at around 11 p.m., but Malvern’s unit stayed at the scene until early Tuesday morning extinguishing hot spots. Malvern says the Mulholland building is a total loss, and some adjoining businesses suffered damage.

“There is a lot of water in the basement of some of these buildings,” he said. “Some of the adjoining basements are joined together, with not much wall space. So, there was a lot of water in the basement. There’s going to be a lot of reclamation, a lot of engineering inspection is going to take place in the next couple weeks.” Hurst says he’s proud of not only the “all hands on deck” approach to the fire from various agencies, but also the Malvern community’s response.

“The community of Malvern stepped up,” said Hurst, “from restaurants, to churches, to the booster club–you name it. They came forward, and brought food and hydration for those firefighters and response personnel, so when they got some crew rest away from the fire–which was not very much–they had a place to go, and get rejuvenated and put back on the front lines. So, I’m pretty proud of the whole evolution last night, and all the cooperation we got from everyone.”

An investigator from the State Fire Marshal’s Office was expected back at the scene this morning to continue an investigation into the cause of the fire.