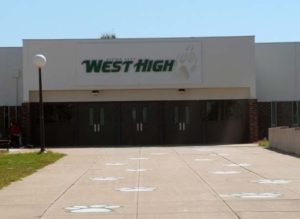 Two juvenile suspects have been arrested after separate online threats led to some Sioux City schools being placed on lockdown today.

A 14-year-old girl was taken into custody after a threat against Sioux City East High School after she allegedly posted a picture of a gun and stated she was headed to the school. Police say she had created a fake profile on Snapchat and made the post to alarm people, but had no plan to carry out the threat. She’s been charged with felony counts of terrorism threats and harassment.

In an unrelated incident, a 15-year-old boy was identified and taken into custody for making a threat against Sioux City West High School. The Woodbury County Attorney’s Office is considering charged against the boy. Because of the threats, a middle school and Bishop Heelan Catholic High School were also locked down as authorities investigated.

Sioux City Police say students and staff at all the schools were safe in their buildings.