You are here: Home / News / Amtrak is back in Fort Madison 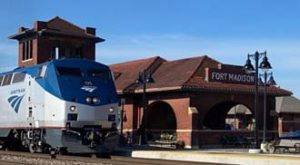 For the first time in five decades, a passenger train pulled into the southeast Iowa town of Fort Madison this morning as part of its regular service, stopping at the original, 111-year-old station.

Fort Madison Mayor Matt Mohrfeld says it’s been many years in the making to restore rail service to the historic Mississippi River town.  Mayor Mohrfeld says, “This one originates in California, the Southwest Chief, and it’s heading to Chicago. It goes right into downtown Chicago at Union Station.”

A second Amtrak train is due at 6:25 p.m. heading for Kansas City and points west — eventually, California. Ridership on the trains is robust, according to Mohrfeld, and he’s confident now that it’s been built, passengers will come. 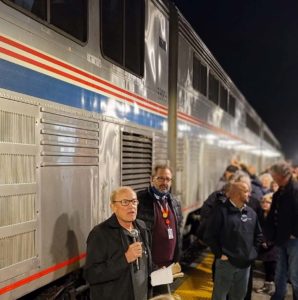 “You can see the viability and if you’ve never ridden a train much, it’s just a really interesting way to travel,” Mohrfeld says. “It’s almost just the opposite of an airplane. The train, you just get on, go sit down and let the world go by, looking at Americana until you get to your stop.”

The Fort Madison train station was originally built by the Sante Fe Railroad, opening in 1910. It’s been fully restored over the past 14 years with features that are now ADA compliant. Plus, the entire station had to be raised above the Mississippi River floodplain.

“It maintains history, it links it to both our riverfront and our downtown district,” Mohrfeld says. “It’s beautiful and we just renovated the street that goes by it, which is our main through street and it looks good. It’s all starting to tie together.”

The mayor is hopeful that more trains will be diverted to stop in Fort Madison, and ideally, he’d like to see a Rail of the Saints, mirroring the existing north-south roadway — the Avenue of the Saints — linking St. Louis and St. Paul.