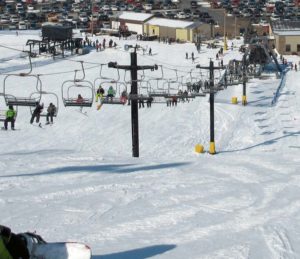 With record high temperatures possible today in the 60s and 70s, not many Iowans immediately think, “Let’s go skiing!” — and ski resort owners across the state are relishing the return of wintery weather tomorrow.

Joel Bryan, general manager of the Seven Oaks Recreation Area near Boone, says it’s been a challenging December for his operation.

“With our updated snowmaking system, Mother Nature has given us enough cold temperatures to continue to put fresh snow out, but then right after we make snow, it seems like we start getting into the 50s and 60s again, so we do get a little melt,” Bryan says. “We are a north-facing slope which gets limited sun exposure, so — so far, so good.”

Today’s forecast for hurricane-strength wind gusts is concerning to all of us, but in particular, Bryan says those winds make it exceptionally difficult to maintain the deep snow needed to run a ski resort.

“The wind will actually melt the snow a little bit faster than just the ambient air temperature,” Bryan says. “Between those two, we’re definitely going to lose two, three, four inches of our base, but we are sitting with a 12- to 18-inch base on 100% of our runs, so fingers are crossed that we can get through this and get to the end of the week when the cold weather comes back.”

Temperatures are expected to plummet after the storm moves through, and highs tomorrow should be back to normal in the 30s and 40s — with lows in the 20s, which is key for switching on the snow machines.

“It looks like Thursday night there’s a possibility that we would start making snow again and then for sure Friday night,” Bryan says. “Looking at the long-range forecast from there, it looks like every night from there on out until Christmas we can make snow which will allow us to be 100% open for skiing, snowboarding and snow-tubing going into the Christmas break.”

Sundown Mountain Resort in Dubuque opened for skiing on most of its runs December 9th, but due to the weather forecast Sundown is closed today, but may reopen tomorrow. Updates are being posted on the Sundown website.