You are here: Home / News / Truckers keeping eye on conditions with wind warnings out 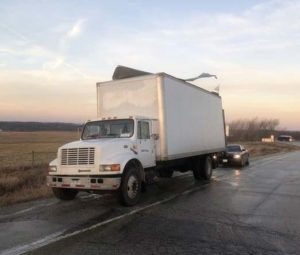 The Iowa State Patrol tweeted this picture of a truck that had part of its roof torn off today by high winds.

With a High Wind Warning covering the state today and forecast wind gusts from 80 to 100 miles an hour, the head of the Iowa Motor Truck Association has advice for motorists as 18-wheelers attempt to weather the storm.

“I would imagine trucking companies have alerted their drivers. Trucks that have lighter loads more than likely will get parked,” Neville says. “The other ones that are out there, those truck drivers are the very best at knowing when and when not to be on the road. They’ll use that common sense and you may see more trucks parked than normal.”

Truckers have to deal with shifting weather conditions every day and while these extreme winds are out of the ordinary, Neville says truck drivers know when they need to park.

“That’s the best thing about the trucking industry, it’s very nimble. We have to make changes very quickly, all the time,” Neville says. “I would suspect in some cases, trucks are being re-routed as well and some concessions are being made, given the forecast that we have today.”

Being near a big semi while traveling at interstate speeds can make some motorists uneasy, but Neville says today’s recommendations for the general motoring public aren’t really any different from what she would have said yesterday.

“Four-wheelers, the cars that are out there on the road today with trucks should be doing the same thing they do every day with trucks,” Neville says. “Be courteous, be attentive, get out of their blind spots, get around the trucks, give them plenty of room, don’t tailgate — the same road awareness that we encourage every motorist to have every day is even more important today.”

Keep up with the changing forecast today at weather.gov.