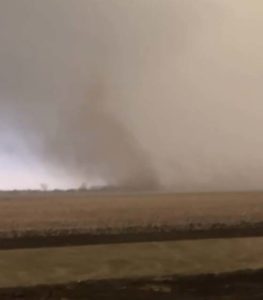 “I wouldn’t be surprised if we have a few more counties that we might add to that, but that’s a significant amount, really, when you think about how fast it moved through the state,” Reynolds told reporters late this morning. “One fatality, so that’s always tragic, a semi that had overturned, but when you consider what’s taken place in the last couple of days with Kentucky and some of the other states and the severe potential of the storm, we’re pretty blessed.”

The governor’s disaster declaration releases state resources, like DOT dump trucks, to assist with clean-up and low income Iowans may apply for disaster aid to cover expenses like ruined food and damaged appliances.

Reynolds said the storm could be Iowa’s second derecho in 16 months.

“They’re still researching the storm to see if it actually raised to the level of derecho because of the speed of the winds and the breadth of it as well,” the governor said.

There were 55 gusts of at least 75 miles-an-hour last night. That’s more than were recorded during the August, 2020 derecho. Reynolds said the forecast for yesterday’s storm — after the tornadoes last week that ravaged Kentucky and several other states — was worrisome.

“I had kind of a knot in my stomach all day. I would be lying if I didn’t say that,” Reynolds told reporters. “…The convergence of all of it was pretty scary, really, and people have been impacted and I don’t want to take this lightly, but we really lucked out. It could have been, you know, potentially a lot worse than it even was.”

Reynolds praised Iowans for responding to the warnings that severe weather would sweep into the state Wednesday afternoon and evening.

“We had schools and businesses that let out early, so we got a lot of the kids home and safe before it actually moved through the state,” Reynolds said, “so I think, all in all, unfortunately, we’re getting a little too much practice in knowing what we need to do to address severe weather events like this.”

While damage assessments are still underway, Reynolds said she would be surprised if Iowa would qualify for a presidential disaster declaration. That’s because storm damage must be significant and widespread to qualify for that federal assistance.